Single girder cranes carry not only the weight 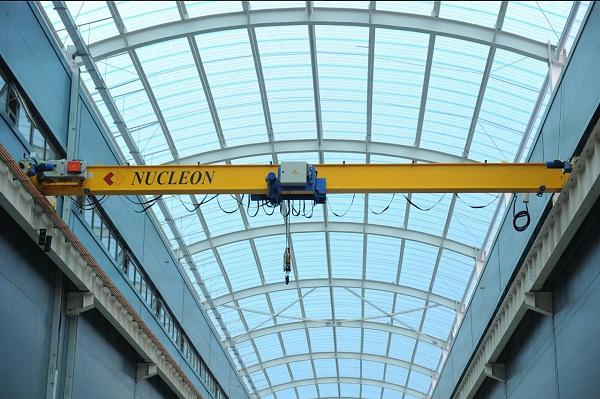 Single-girder crane is a kind of bridge type crane, it relies on hoisting mechanism and two perpendicular direction in the plane of the mobile operation, Can work in the rectangular space and its over, is widely used in industrial and mining enterprises a lifting transport machinery. It has the advantages of large carrying capacity, high reliability, and relatively simple manufacturing process.
After Electric single-beam crane oil pump motor power failure, the hydraulic system due to one-way valve and solenoid valve of the pressure, so that the clamp is always in the open position. However, due to the existence of internal leakage of hydraulic system, after opening the clamp, after a period of time, the degree of opening will be reduced to a certain extent, limit switch,
Will cut off the time relay and connected to the pump motor, re-filling the fuel tank, so that the clamp has returned to fully open position.
Single-girder overhead crane is the most widely used, has the largest single-track operation of a single-girder crane, Its rated weight from several tons to several hundred tons. The most basic form is the universal hook bridge crane, other forms of overhead cranes are derived from the general hook crane on the basis of the development out.
The rail clamp and the locomotive are connected by the hole at the rear end of the clamp shaft. When the locomotive is moving, the guide wheel can roll along the serpentine orbit under the weight pressure of the clip rail when the dragging (moving) clamp moves synchronously. Guide wheel bracket, guide clamp shaft drive clip rail as a whole in the fixed axis along the track surface floating.
Automatic clamping device can automatically electric single-beam crane locked in the track, To prevent accidents by thrust and sliding. The rail clamp is automatically opened when the cart moves, and the other state is automatically clamped. Control system using Siemens PLC control, Without changing the operation of the original machine under the premise, Through the PLC system will be walking crane crane and stop, Brake opening and braking, Clamp opening and clamping movement and other automatic control to improve the machine stability and safety.

We are manufacturer supplying all kinds Of Gantry crane,Overhead crane,Jib crane,Electric hoist with accessories! Inquiry to Get Latest Quotation and Product Catalogue !
Previous: Mini Electric Hoist Next: single-beam cranes