HOME » FAQ » How to solve the overhead crane failure

How to solve the overhead crane failure

How to solve the overhead crane failure 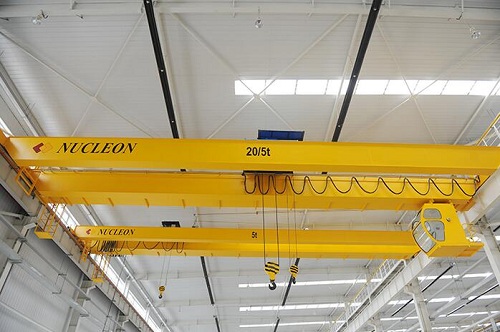 It is often said that the plan can not keep up with the changes, overhead crane manufacturers in the design and development of overhead cranes need to consider a variety of failures and various adverse factors, and to improve themselves; but we get the overhead crane when it is still there will be a variety of problem and failure.

So how do we solve the overhead crane when it suddenly fails?

The controller did not stop at zero when parked. At this time the brake solenoid is not powered off, the overhead crane does not stop. But the driver mistakenly thought that he had “stopped”, so the phenomenon of the rapid decline in load occurred at this time that the brake failed.

When the brake contactor is closed (brake release) when the contactor of the PQR6402 control panel with two-stage reverse brake is not closed, when the reverse contact level is switched from the reverse brake level to the regeneration descent level, While the motor is not powered, so the hook will fall freely.

Brake suddenly after the failure, should immediately be a point car or anti-car operation. After the car and anti-operation, if the failure situation continues to exist, it should be based on the situation at the time of the object, take the effective emergency measures, and issued a warning signal.

If the work is close to the ground, there is no danger of falling, it should be pulled to the last block of the brake, with the normal method of operation, the required objects to go down. Not allowed to let it fall freely.

If the original position to fall directly to the object will cause an accident, it is necessary to act decisively open anti-car, the controller handle step by step to the direction of the last gear (to pay special attention to, then can not suddenly turn the control handle to The last file, because the action will be too fast will over-current relay action).

The condition that the hanger can not stop moving when the crankshaft is pulled back to zero is called the brake failure. The sudden failure of the brake will cause the hook to fall rapidly, resulting in significant equipment accidents and personal accidents.

Each driver should have a high sense of responsibility, pay attention to pre-test repair, to prevent the sudden failure of the accident occurred. When the brake suddenly fails, the driver should be calm, calm, take reasonable measures to minimize or eliminate the possible accidents and losses.

We are manufacturer supplying all kinds Of Gantry crane,Overhead crane,Jib crane,Electric hoist with accessories! Inquiry to Get Latest Quotation and Product Catalogue !
Previous: operating the gantry crane Next: How to select of gantry cranes?