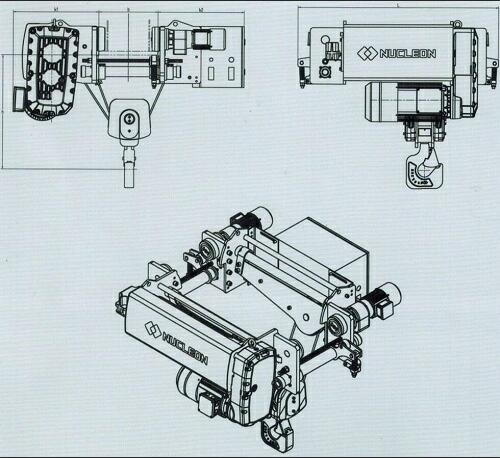 Wire rope electric hoist can not be inclined hanging heavy objects, why? From the perspective of our physical mechanics!

Junior high school physics class we learned a knowledge point that: If you want to bring a heavy object, are brought him straight up, if the ramp, then the power consumption of more, but also not smooth, in fact, the reason for the wire rope Electric hoist on the same applies.

Lifting heavy objects in the wire rope hoist, we also require a vertical lifting, do not oblique hanging cable, if oblique hanging cable，will not only make heavy objects swing or collide with other objects, but also cause broken rope, Overload, and even heavy objects such as falling, resulting in immeasurable losses. If the wire rope is squeezed in the reel shell or fall outside the pulley, the inclined cable-stayed cable will be squeezed bad; if the weight of the pulled objects, but also the phenomenon of wire rope fracture. This is very dangerous.

According to the law of the decomposition of the force, the tension S can be decomposed into a vertical component force N and a horizontal component F. As can be seen, S> N, because the requirements of N = P, so S> P. That is, the slant crane wire rope tension than the weight of heavy objects, and the larger the angle α hanging angle, S is also greater. Ramp will produce overload, is this truth.

In addition, due to the ramp to produce a horizontal component of force F, when the weight off the ground, F force will drive the weight to the vertical center of gravity swing, if at this time close to the other objects can touch. This is not another important reason for the ramp.

Through the above example analysis, I believe we will be able to understand why the wire rope electric hoist is not inclined hanging ramp, but also to remind you in the use of the user must comply with the procedures for operation.

We are manufacturer supplying all kinds Of Gantry crane,Overhead crane,Jib crane,Electric hoist with accessories! Inquiry to Get Latest Quotation and Product Catalogue !
Previous: types of gantry cranes Next: hoist motor