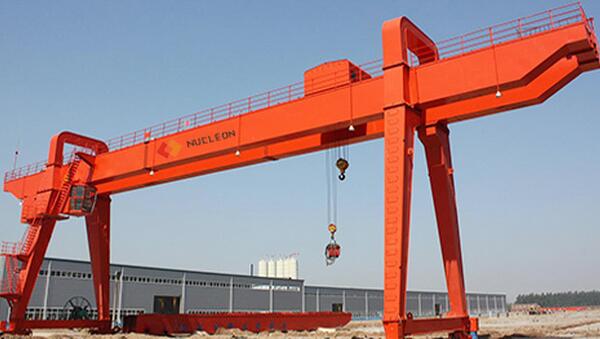 Rotation work, the brake failure on the rotation of the worm gear box disintegration can be found when the limit torque limiter does not reach its design resistance torque slip failure.

(1) Analysis of the reasons: the actual operation of the gantry crane rotation start, the brake is very frequent, so that the torque limiter friction plate and the worm gear cone between the cone often produce relative movement and wear, up and down friction plate along the worm cone gradually closer. Due to the intersection of the upper and lower taper of the worm gear, and its diameter is smaller than the small diameter of the friction plate, and thus the inner surface of the worm wheel was grinding out the annular boss, then by the compression spring compression force It is shared by the two parts of the conical surface and the annular boss plane. When the compression force of the annular boss plane is dominant, the above fault occurs when the bending force of the boss is short and the friction surface is small and the friction torque is smaller and less than the original design torque.

(2) exclusion method: the rotating worm gear box disassembled, remove the worm wheel, the worm wheel on the cone on the ring-shaped convex car to the worm wheel sets of two cone intersection at a transitional cylindrical surface, and the cylindrical The diameter is slightly larger than the small diameter of the friction plate.